Media Literacy What Is It?

Media Literacy: What is it? 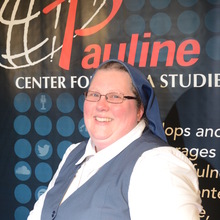 Sister Hosea Rupprecht, FSP, is a member of the Daughters of St. Paul, a religious community dedicated to evangelization with the media. She hails from Renton, Washington (near Seattle). At age nine, her Dad took her to see what we now call Star Wars Episode IV: A New Hope. This—and the voracious reading of Hardy Boys books—cemented a love of story in Sr. Hosea. When Indiana Jones and the Raiders of the Lost Ark came out in 1981, she wasn’t allowed to see it so, like any enterprising teenager, she went to see it with some friends without telling her parents. It was during this time that she realized how influential media stories can be and that the “greatest story ever told,” that of Jesus Christ, could also be told using the media. It’s no coincidence that the Holy Spirit led her to the Daughters of St. Paul.

Now, Sister Hosea is director of the East Coast office of the Pauline Center for Media Studies and speaks on media literacy and faith to catechists, parents, youth, and young adults at the parish, diocesan, and national levels. She publishes weekly film reviews from a Catholic perspective for the Pauline Center for Media Studies website, bemediamindful.org, as well as providing one-minute audio film reviews for Immaculate Heart Radio. She also hosts monthly Cinema Divina events in New York City.

Sister Hosea is the author of How to Watch Movies with Kids: A Values-Based Strategy, aimed at helping parents dialogue with kids about media and to develop a family strategy so that media choices reflect the values of Jesus Christ. Together with Father Chip Hines, Sister Hosea co-hosts Searchlight, a Catholic movie review program on Catholic TV (catholictv.org), which reviews popular film from a Catholic perspective.

Media pervade our lives. Growing in the skills of media literacy helps us to become critical engagers of the digital media culture. This course goes through the Core Concepts and Key Questions associated with media literacy, enabling us to make media choices consistent with our personal values and faith values.

Media Literacy: What is it?

Media Literacy: Core Concepts and Key Questions
06:09
Who Created This Message?
04:49
What Creative Techniques are used?
08:39
How might we experience messages differently?
05:02
What Values are Present or Omitted?
09:28
Why is this Message being sent?
09:51
Conclusion
12:26
We suggest moving this party over to a full size window.
You'll enjoy it way more.
Close
Go Fullscreen